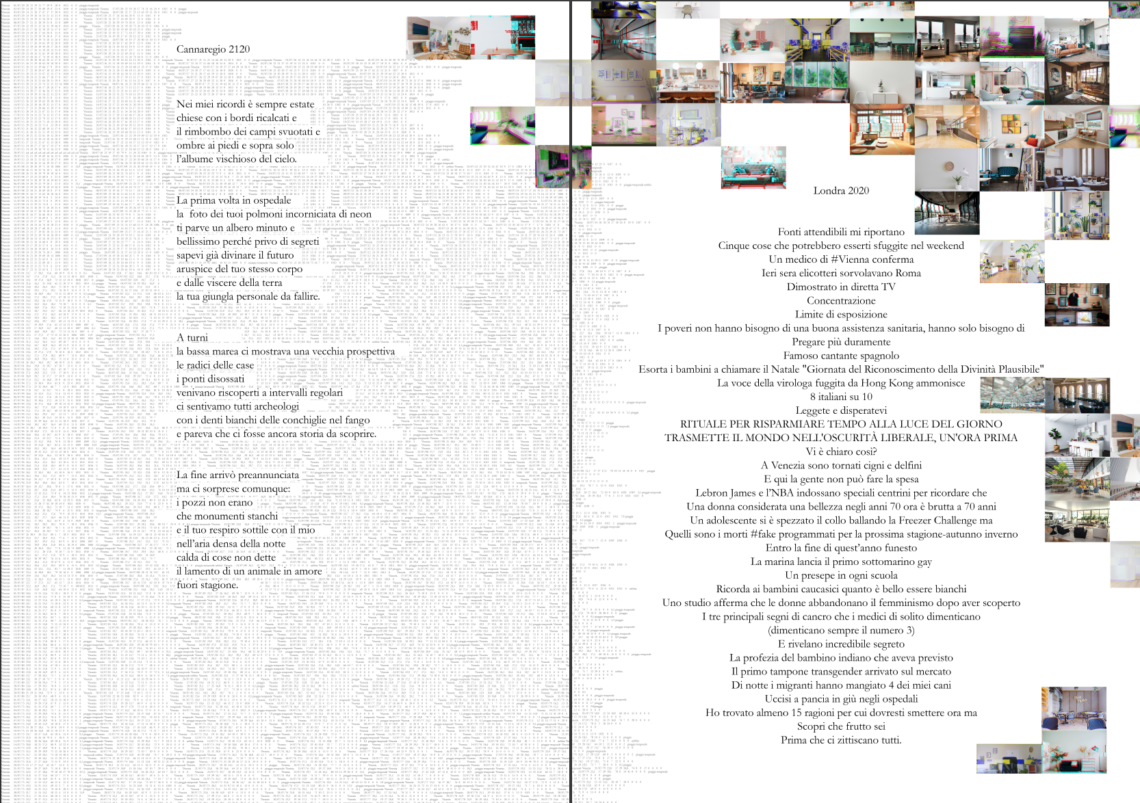 “Non crederai mai a quello che i nostri discendenti ci rinfacceranno” blends visual poetry with digital spaces and historical data, to touch on three topics that often recur in contemporary discussions on our future: climate change, technological progress and fake news. It is made of two poems (both written in Italian) in conversation with each other, with weather data and ‘glitched’ images as background.
The two poems are inspired by different places and moments in time: ‘Cannaregio 2120’ is a brief story of love and grief, set in a not-too-distant future dominated by the dramatic effects of global warming. The data in the background is the collected daily data in Venice, recording the weather for every July from 1973 to 2020. This data includes rainfall, humidity, wind force and the average temperature for each day of the hottest month for the last 47 years. Although it might be hard to notice a clear change in the minuscule background numbers, the increase in temperature slowly reveals itself flooding and drowning the text of the poem.
‘Londra 2020’ is an example of found poetry that mixes online headlines in a poetic collage to represent our present time. Each line is taken from a headline found online – some from Italian sources, others translated into Italian using Google Translate, resulting in absurd and alienating verses. All of these headlines have one thing in common: they are all fake news. Many of these articles make use of clickbaiting, with sensationalist yet vague headlines to attract as many clicks as possible – the title of the piece ‘non crederai mai a quello che i nostri discendenti ci rinfacceranno’ (‘you’ll never believe what our descendants will hold against us’) is also based on this technique.
The images that surround the text of ‘Londra 2020’ are all screenshots of virtual backgrounds for the video-conferencing platform Zoom. Using virtual backgrounds during video calls is a way to protect our privacy, but also a way to remove our differences in terms of location, nationality and even class. There seems to be a preference for a specific kind of aesthetic: minimal and distinctly Western. The screenshots were modified to mirror the glitches, blurriness and other bugs typical of virtual communications.
The two poems that make the piece are divided by time and space, but as the data and images gradually mixing and overlapping in the background might suggest, not as far apart as one might think. Together they make a visual poetry work that uses data and digital environments to imagine our future and raise awareness about our current crisis. Through the tools and manifestations of web-based culture, it explores our evolving rapport to spaces of communication and our approaches to building relationships in the emergence of digital dislocation.

Giulia Carla Rossi is a researcher, curator and artist based in London. She is Curator for Digital Publications at the British Library, working in the department of Contemporary British Collections. Her research interests include digital preservation (especially for born-digital complex publications), digital literature, curating digital collections and exhibitions, interactive narratives, net art, visual poetry and creative computing. In her creative work she uses digital tools to create storytelling experiences that explore language, queerness and archival practices. She is currently enrolled on a MA in Computational Arts at Goldsmiths University of London. 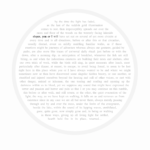