Preoccupations presents prose-poetic and discursive ‘translations’ between a pair of structurally related texts, set respectively in contemplative rural and conflict-riven urban environments. Words and phrases in each are connected via an associative chain of intermediaries, along which the piece perambulates, with dynamic word-level replacements occurring in real time. These replacements may rhyme, ‘sound like’, or ‘look like’ their predecessors. Beginning in one or other of the texts, the piece sets out in the direction of its counterpart. Via a retained a history of its path – unique to each iteration – it then attempts to return, shuffling back through this history towards its starting point. Upon reaching, or failing to reach, its destination it sets out immediately once again, with each journey a transversal – of proximal texts in a high-dimensional vector space – toward the possibility of parallel expeditions, both feared and desired. Where is it that we are taking our daily walks, and why? These are the piece’s preoccupations, when “all space is occupied by the enemy.” (Raoul Vaneigem)

This work was developed from what is now an earlier iteration, a Ramble, as we called it, that explored the same dynamic word replacements, setting out from and returning to the ‘rural’ text of the current work. It was a computationally modulated ramble in lyrical, quasi-randomly disrupted memory. Actual events and history – in Palestine (at the time of initial development), Syria, now Ukraine, and many, many other places elsewhere (let’s not forget) – made dynamic, semantically implicated journeying within such sheltered confines impossible, and so the closely related ‘urban’ text was composed and integrated into our Preoccupations.

Initial development of our Ramble was undertaken on Observable, a no-install live-coding notebook platform, amenable to literate programming. Insight into the algorithms we use can be gleaned, in particular, from the notebook published last year in the utopian pre-launch Annual of the Language Art Observer (LAOB). Many NLP affordances, with language-art and literary traction, are provided by Daniel Howe’s RiTa, a free/open source library for writing in programmable media. Here are links to the RiTa home page and RiTa in Observable.

Daniel Howe is an American artist and writer working primarily with computer code. Addressing issues such as privacy, surveillance, disinformation and representation, his output spans a range of media, including installations, artist books, sound recordings and software interventions. He currently lives in Hong Kong where he teaches at the School of Creative Media.

John Cayley (https://programmatology.shadoof.net) is a writer, theorist, and pioneering maker of language art in programmable media. Apart from more or less conventional poetry and translation, he has explored dynamic and ambient poetics, text generation, transliteral morphing, aestheticized vectors of reading, and transactive synthetic language. Grammalepsy: essays on digital language art was published in 2018. Professor of Literary Arts at Brown University, he directs a graduate program in Digital Language Arts. 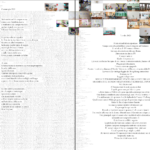